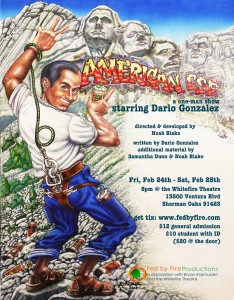 As a young boy, Dario Gonzalez fled to California with his family in a desperate attempt to escape the Salvadoran Civil War.  While Dario’s story is a deeply personal account of prejudice, addiction, recovery and making peace with a painful family history, his wildly funny performance smartly illuminates the plight many Latino immigrants face as they strive for that most American of ideals: The pursuit of happiness.

Our productions is a revival of the successful 2005 production glowingly reviewed by Backstage West and LA Weekly.

American Ese is a surprisingly genial and passionate account of the American immigrant experience…How many Americans have stories like this to tell? And how rare it is to hear the tale this vividly, from this particular angle…Gonzalez is a wonderfully engaging narrator of his experience, and his charisma is such that we almost immediately feel like we’ve known him for years. Blake’s crisp, intimate staging is extremely well-timed, bordering on the delicately acrobatic.

With three writers it’s a miracle that any one-man show comes out in the wash intact, yet the writing is this show’s strength. Under Blake’s direction, Gonzales performs the autobiographical story of his youth in El Salvador… It’s sort of a rags-to-riches tale: Gonzalez has landed movie roles playing an illegal immigrant…The irony isn’t lost on him. Among the show’s pleasures is Gonzalez’ cynicism and candor about his almost-genetic attraction to the bottle. In a pre-emptive apology, he implores us not to be too hard on people who don’t speak good English, but Gonzalez’ English is no impediment…His story is able to overpower. – LA Weekly

Originally from El Salvador, Dario Gonzalez began studying acting at Santa Monica College, which eventually led him to the ongoing workshop of director Noah Blake. Since then, Gonzalez has starred in the independent film “Tenth,” a Tribeca Film Festival winner (ravenpictures.com), was among the talent seen in the movie “Along Came Polly,” and is featured in the film “Fun with Dick and Jane.”  Past work includes performances on “American Family,” “Resurrection Boulevard,” and Telemundo’s drama series, “Placa.”

In addition to his acting credits, Gonzalez is also a professional mambo and West Coast swing dancer who has traveled the U.S. and Canada.

Noah Blake is a native Angeleno raised in the entertainment world, who began his acting career more than twenty years ago. This past year Noah directed the web series “Besties” and he recently completed acting rolls in the Feature films “Piranahconda” with Michael Madsen and Rachel Hunter as well a “Rock Barns.” His numerous film and television credits include Married…With Children, JAG, ER, L.A. Law, The Wonder Years, and a staring role on Harry and the Hendersons. His talent, experience and insight have earned him a reputation as a highly respected actor, acting coach, director, and writer. “It has been an amazing journey for me to have helped Dario bring American Ese from it’s fledgling beginnings in my acting class to the fully realized tour d’ force that it has become. I couldn’t be more proud of Dario or the show it’s self. My hope is that this piece can bring laughter, insight and understanding to all who see it.”

Samantha Dunn is the author of Failing Paris (Toby Press), a finalist for the PEN West Fiction Award in 2000, and the memoir, Not By Accident: Reconstructing a Careless Life (Henry Holt& Co.), a BookSense 76 pick. Her essays have appeared in numerous national publications including the Los Angeles Times, O (Oprah) Magazine, Ms., and Shape. In 2000 Dunn received the Maggie Award for Best Personal Essay in a Consumer Publication. A widely published journalist, Dunn’s bylines are regularly featured in InStyle, Glamour, SELF, Men’s Health and a variety of other consumer magazines. She teaches in the UCLA Extension Writers’ Program and is a writer-in-residence at the New York State Summer Writers Institute. Her most recent memoir, Faith in Carlos Gomez: A Memoir of Salsa, Sex and Salvation, is published by Henry Holt & Co.

Sylvia Loehndorf founded Fed by Fire Productions in 2009. She started by producing improv theatre with her troupe Ducktape Improv. The following year, she produced Patrick Marber’s Closer. Last year, she embarked into film by producing two shorts called “The 5 Stages of Decomposition” and “Bruce Malloy, Private Investigator.” She received her B.A. in Theatre Studies from Brigham Young University as well as the 2004 ORCA Grant for her work on Matthew Barber’s Enchanted April in Northampton, England.

In addition to her producing credits, Sylvia starred in the award winning short film “Meditations: Supper” and studies at the Beverly Hills Playhouse.